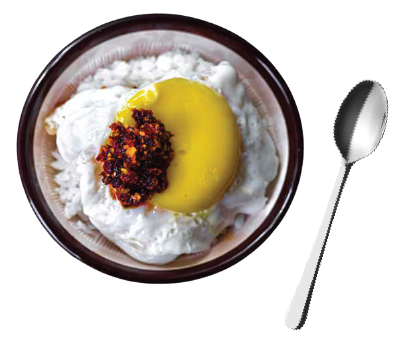 Two friends sit around a small table. A bowl of hot rice topped with a sunny side egg and lots of crispy chili garlic sauce sit in the middle of the table. Their eyes are closed… They reminisce… How all this started…

Charles and Calvin met when they were studying in Japan. While both were certified as Food Hygienist by the Ministry of Health of Japan, the high living standards in Japan had drove them to take up part-time jobs to survive in the Land of the Samurai.

Coincidentally, the two friends both found work in the same sushi restaurant in Toyocho, Tokyo. The restaurant was one of the best in Tokyo and had been handed down from generation to generation. It was also in this restaurant where they first met their Sensei - Master Okino, which is also the 5th Generation Head Chef.

As a strict and demanding old Washoku chef still believing in the traditional Japanese disciplines, Master Okino trained Charles and Calvin with an iron fist. The two friends often grumbled about their training but were also satisfied to see their skills being honed.

The Birth
of Chili's Mate

Upon returning to Malaysia in 2016, Charles and Calvin wasted no time in making the perfect Chili Sauce for their beloved Malaysians. If at ﬁrst you don’t succeed, try, try again. They two friends spent many sleepless nights trying to come up with the best chili sauce that can be made. Finally, after a full year of trial and error, Lacust was born in a small shop lot in 2017.

The celebratory mood, however, did not last long. Due to the lack of business operating experience and resources, Charles and Calvin soon themselves facing challenge after challenge.

A new trinity unites the Lacust team. While not knowing each other long, a shared vision align the three friends together.

Lacust’s vision is to make Malaysia proud. By producing high-quality Chili Sauce products with only the freshest ingredients sourced from Malaysia, Lacust aims to show the world how excellent a Malaysia product can truly be!!